Herbalism is the use of plants (such as leaves, flowers, fruit, seed, stems, wood, bark, roots, rhizomes or other plant parts) to heal and support the body. Plants have been used in these traditional ways since the beginning of recorded history. As winter approaches our attention once again turns to keeping our immune system healthy and functioning. In addition to a healthy diet, getting rest, and exercising, herbs can play an important role in your wellness routine. We asked Guido Masé, Chief Herbalist at Urban Moonshine to share some of his knowledge about traditional herbs used to boost immunity, including elderberry/elderflower, echinacea, and elecampane. Here’s what he shared with us:

As the season gets colder, it’s time to get to know the Elder plant if you haven’t already. Elder (Sambucus genus, including S. canadensis in the east and midwest, S. caerulea out west, and S. nigra in Europe) has long been revered as a medicinal, and somewhat magical, plant: in Europe, mountain folks still tip their hats when they walk by her. The modern research literature emphasizes Elder’s immune-supportive properties, since it seems that the berries and their preparations really can ensure a healthy immune response in the face of viruses, cold air, and everything else the winter season throws our way. But it’s not just the berries that deserve attention: the flowers, too, support healthy circulation and normal mucus production, keeping us warm and clear while snuggling up by the fire or adventuring in the frozen outdoors. As a kid, I remember harvesting the abundant flowers and then, later, when the snow would cover the mountains, brewing them into tisane. This is a healing tea blend for the colder months that encourages warmth, supports healthy circulation, and brings more immune-supporting polysaccharides into the physiology. For this purpose, Elder flowers combine well with catnip, goldenrod, nettles or red clover. Sometimes, to ensure healthy perspiration during a fever, Elder flowers and berries are combined with yarrow and peppermint, too.

At Urban Moonshine we’re definitely big fans of Elder, and like bringing its power to you by featuring both the berries and the flowers. Most of the certified organic berries we use come from just over the border from Vermont, in Quebec, where they’re frozen immediately after harvest to await juicing. The juice is strained to remove seeds: these, plus traces of stem, bark, leaf or petiole, are undesirable and can cause unneeded digestive upset. Flowers are harvested at their peak in mid-summer, and dried before being removed from the stem and extracted. If you’re gathering flowers, make sure to leave more than half so you’ll have berries in the fall.

Finally, Elder wood, though not used in medicine, has long been reputed as the source of the most powerful magic wands (way before Harry Potter). The woody stems are hollow: you can stuff them with herbs linked to clairvoyance and magic, like sage, mugwort or lavender. Just be sure to ask the Elder mother first (she’s thought to inhabit all Elder groves): careless harvesters have been known to run into unexpected trouble, or get hopelessly lost, and lose all their possessions! 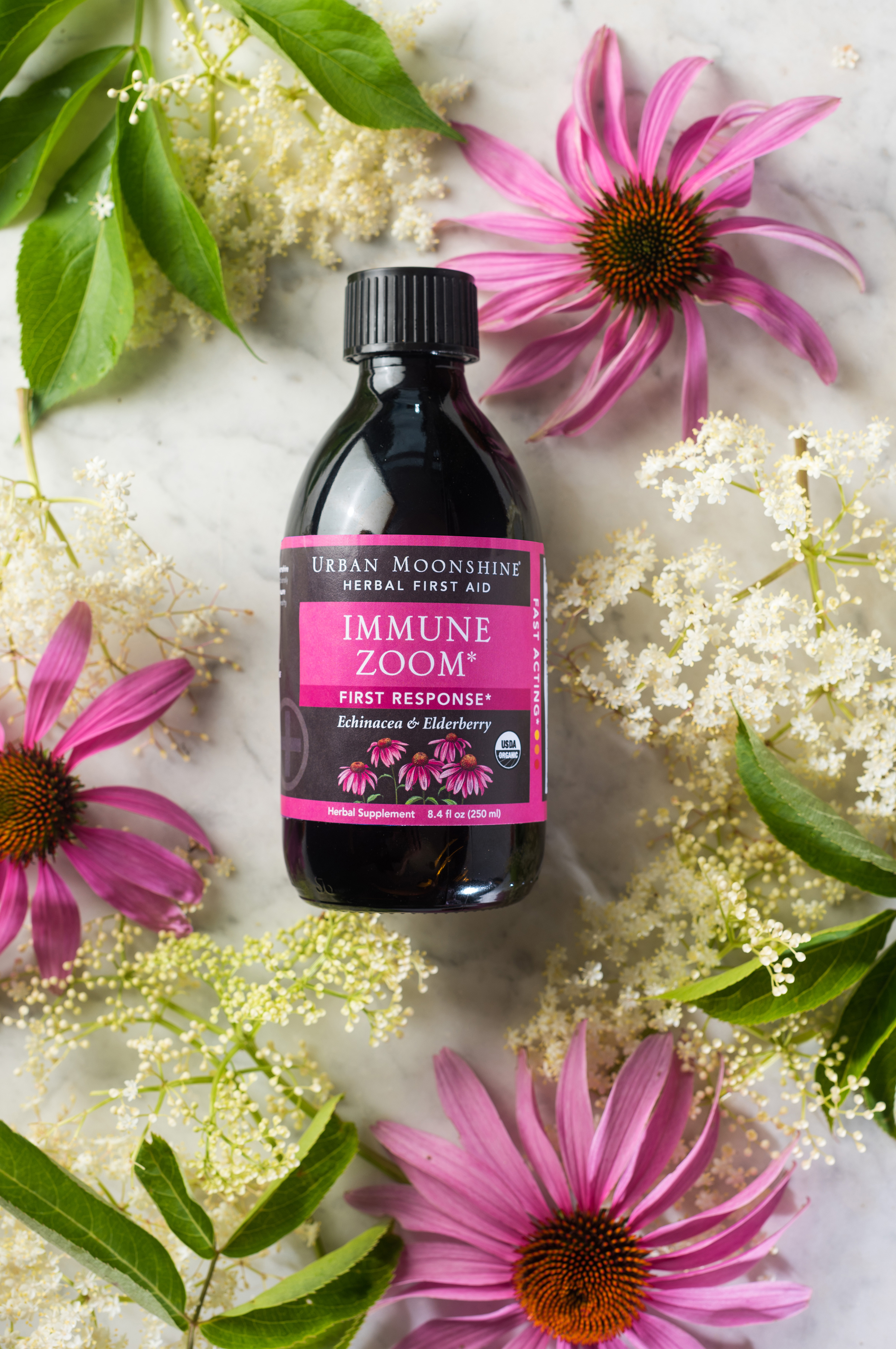 Echinacea is an amazing plant that comes to us as a North American native. Europeans came to know it thanks to First Nations people who relied on Echinacea for a range of uses, but perhaps most often as an antidote for snakebite. It is rumored that John Uri Lloyd (a physician from the 19th century US) was so confident in this power that he ran traveling demonstrations where he let a rattlesnake bit him, then used only Echinaea root for self-treatment. While we don’t recommend trying this at home, we do agree that Echinacea has a well-deserved reputation as an herbal “alterative”, able to clear “heat” from the channels of the body. These days, this means Echinacea is a great ally to support a healthy immune response for a range of challenges.

The tingle you feel on your tongue when tasting fresh Echinacea roots, seeds or leaves is caused by pungent compounds known as alkylamides, similar in structure to capsaicin from hot peppers, but giving a cooling, rather than heating, sensation. These compounds are part of how Echinacea supports excellent surface immunity: it can ensure optimal secretion levels and antibody production, to keep our barriers in the respiratory system working at their best. But the whole plant contains a range of important polysaccharides, too (including arabinogalactans): their ability to interface with immune cells contributes to this plant’s overall effects.

There are many different types of Echinacea preparations available. Some favor the alkylamide tingle: roots of E. angustifolia are often the strongest in this regard. But E. purpurea, which has appreciable quantities of alkylamides too, might have a higher polysaccharide content – including its leaves, buds, and above-ground parts. In Europe, E. purpurea tops are juiced as medicine, while here in the US we often find tinctures of roots instead. Here at Urban Moonshine we use both parts: leaves and flowers are harvested an extracted in July, at the peak of vibrancy, while roots of 3-4 year old plants are dug up in the fall. We extract each part separately then blend them together for a full-spectrum preparation. Elecampane is an unsung herbal hero! We really wish more folks were aware of this fantastic herb, because even though it grows like a weed in moist forest borders, it is a unique and precious ally (especially if you live in cool, damp climates). The root, which is the medicinal part, can get quite large, tangled and knotty, and it exudes a warmth and spice that can be hard to find in the woods and fields of the temperate zone.

Herbalists often turn to Elecampane for supporting clear, healthy lungs and bronchial passages. Its warming energy helps ensure that the natural self-cleaning process in our airways is functioning at its best while keeping our circulation humming along, too (both are important during the colder months of the year). To extract these virtues, herbalists use alcohol, apple cider vinegar, or honey. All are excellent at capturing Elecampane’s flavor and power, though the honey makes one of the tastiest preparations: dry root, finely chopped, is left in honey on a sunny windowsill for two weeks. Then a spoonful makes an instant warming tea – just add hot water!

But Elecampane doesn’t stop at the lungs and respiratory passages. It has always been used as a warming digestive bitter, too: there are notes of numbing bitterness that persist after the initial spicy impression, and the root is loaded with inulin, an important prebiotic starch (in fact, this particular prebiotic gets its name from the botanical binomial for Elecampane, Inula helenium). These two qualities – the bitterness to activate our digestive secretions, and the starch to support healthy gut flora – make Elecampane a good choice for folks who also want excellent digestive health and support for occasional gas, bloating, heartburn and bowel irregularity.

One final note: the flowers of this plant are unique, with thin, yellow petals on a bright yellow disk. They possess a lot of the qualities and flavors of the root (minus the starchy component). We think they’re quite beautiful. And legend has it that Helen of Troy, when she fled her homeland of Sparta with Paris, brought with her a bouquet of Elecampane. This is how the second part of its name – helenium – came to be. But it also reminds us that Elecampane’s blooms are amazing in late summer arrangements, and persist for a long time.

2 thoughts on “Herbal Remedies for Immunity”