On a sunny day in the Summer of 2018, the Kimberton Whole Foods Marketing Team got the chance to visit Mompops, makers of all-natural, allergen-friendly ice pops based out of Kennett Square, PA. After touring the facility, learning about where they started and where they are going, and of course, eating some delicious pops, we are excited to share the story of this fantastic local company with you. Mompops was started by mother-son team, Sandra and Issa Ostrander. As a school teacher, Sandra saw first-hand how food allergies, dietary restrictions, and obesity are on the rise among the nation’s youth. She and her son set out to be a part of the solution by creating a healthy, portion-controlled snack that everyone could enjoy. They launched their business from a small kitchen space in West Chester’s Artisan Exchange. Because they produce a gluten-free and peanut-free product, they quickly came to the conclusion that a shared space was not going to allow them to grow, and so they began searching for a new space which would be all their own, free from the danger of cross-contamination of other producers.

The Mompops facility in Kennett Square is unassuming from the outside, but is bright and clean inside, with popsicles painted along the white walls of the production space. 2018 will mark their 3rd year of production in the 2,300 square foot facility. Today, in a 6 hour shift, they can crank out 10,000 pops – 3 years ago, it would have taken five 12-hour shifts to complete this same quantity!

Just prior to moving the business to Kennett Square, Sandra and Issa found a new partner in Stephanie Cohen. Stephanie comes from a successful career in healthcare operations, but it was while she was wrapping up another venture at Artisan Exchange that she met Issa. One day, while discussing his goals for the future of the company, Stephanie offered to do a SWOT analysis with him and take a look at his books. They were up until 3am that night, and their partnership was born. Stephanie saw what a hard worker Issa was, and was instantly passionate for the mission of the company. “It spoke to everything I look for,” she says. Today, Stephanie handles office work, sales, and marketing for the company, while Issa is responsible for producing all of the pops. Mompops are made using frozen fruit, never from concentrate. They’re lightly sweetened with organic agave nectar, and never contain dyes or preservatives. All pops are gluten-free, peanut-free, dairy-free, soy-free, non-GMO, vegan certified, and kosher certified. All of their fruit-based pops are “Smart Snack Approved”, and clock in at just 2-4 grams of sugar, and 15-20 calories a piece. They come in flavors like mango, pineapple basil, strawberry lemonade, and chocolate sea salt. In addition to the certifications listed above, Mompops is also a Certified Woman-Owned company, thanks to the leadership of Sandra and Stephanie.

They’re perhaps most passionate about seeing their pops in the hands of children, as they represent a healthful and safe snack option, which can be difficult to find. The majority of phone calls that Stephanie receives are in regards to allergies, from parents who want to make absolutely certain that the facility is peanut-free or gluten-free. Luckily for concerned parents, Mompops is absolutely safe to enjoy for children with these life-threatening allergies.

Most importantly, Issa listens to his consumers. For years, he would sample pops for customers, including right at KWF. The sample portions were tiny versions of the full-sized pops for sale. When he would show customers where to purchase the pops after they tasted them, they would say, “oh, don’t you sell the tiny ones?” Issa was asked this enough times that now he offers 1oz pops, which is the perfect size for a sweet treat.

One of the biggest takeaways from our conversations with Stephanie and Issa is their commitment to quality, down to every last detail. “We try our popsicles almost every day, sometimes we eat 10 pops a day,” says Issa. Stephanie explained how “one of the biggest challenges in a grocery setting is people opening and closing the freezer doors while shopping”. This causes ice crystals to form on the pops. As part of their recent rebranding, they also selected new packaging, which includes a thicker wrap and thicker box, to help maintain the integrity of their pops in the store. 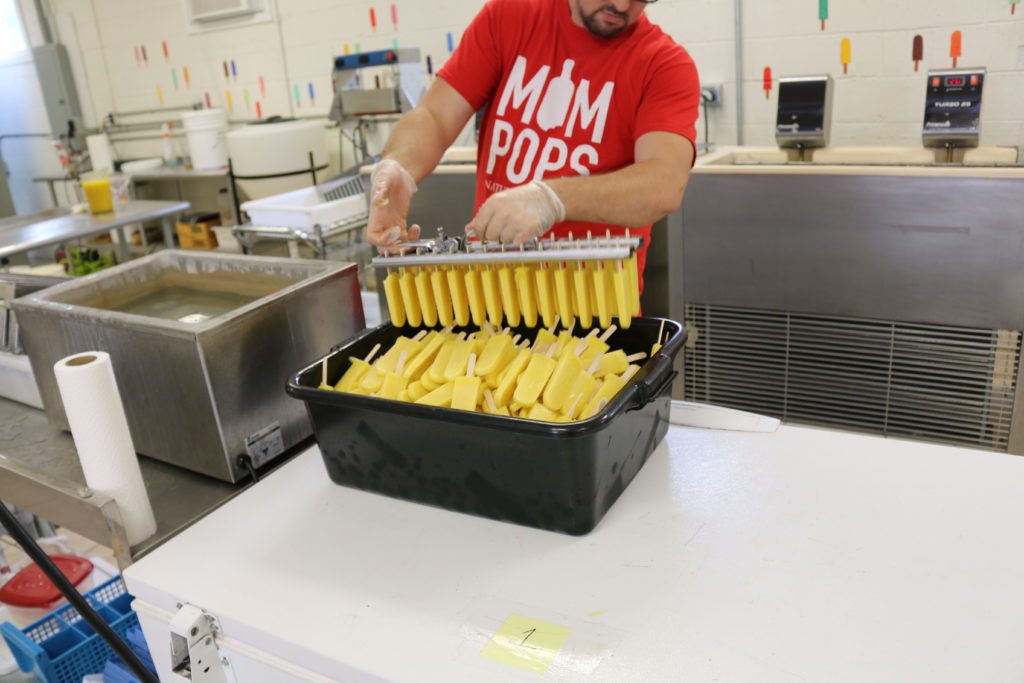 We were thrilled to get the chance to walk through the production room and see how the pops are made. First stop was the buckets of fruit and fruit puree found in a large walk-in cooler. Issa used to blend his purees in a standard Cuisinart food processor, and pour the pops from pitchers. Today, he purees 30 gallons at a time with an industrial immersion blender. The blender was his first purchase towards automating his process. Stephanie proudly picked up the blender to show us, and Issa laughed at her in the corner as she briefly forgot how to switch it back off. We could see how the two balance each other and create the elements of this fantastic team. Stephanie reminisced about how she looks back on Issa’s original recipes which yielded 8-12 pops, and marvels at how far they’ve come.

Next, we made our way over to the stick station, where their part-time helper was lining up wooden sticks. Stephanie enthusiastically encouraged our tour group to get in and try it – Becca, Director of Marketing, and CJ, Visual Coordinator, each tried their hand at lining up sticks. (Spoiler alert: it’s monotonous work!) We watched as Issa carefully poured and “painted” the fruit puree into the pop molds with a spatula, to leave a clean edge on every pop, every time. The pops are then placed in a flash freezing unit, which brings their temperature down to -25 degrees F. On the day we visited, the crew (which consists of just Issa and one part-time helper) was producing their vibrant mango pops. Stephanie explained that they only do one flavor per day, because the clean-up between flavors takes 1.5 hours. If they’re producing the Chocolate Sea Salt flavor, clean-up takes even longer, as they have to do a deep-clean to remove all traces of coconut, a potential allergen. Every single day, before starting production, they test for contaminants, to be sure that their facility is safe and clean.

The second purchase towards automation was a Chinese packaging wrapper which Issa found on Ebay. He and a friend drove to Ohio to pick it up, but, as the instructions were all in Chinese, it took him nearly a year to learn how to use it! As luck would have it, while he was still working at the kitchen in West Chester, someone happened to be walking through who saw the machine and stated, “oh, I sell those!” Issa quickly set up an appointment with the individual, who had the machine humming in just a couple of hours. “This is what made our company grow,” Issa said with pride, looking at the machine. While at its fastest it can wrap up to 102 pops an hour (Stephanie equated this scene to Lucy in the chocolate factory), they’ve now settled on a comfortable 56 pops per minute, which ensures that the packaging is set perfectly every time.

We rounded out our tour by viewing the space where the pops are boxed up for sale, and peeking into their walk-in freezer where the finished pops are stored at a brisk -8 degrees F.

Stephanie explained to us how Mompops has changed and grown over the past few years. Just 6 weeks after they moved into their new space, in 2016, they received an order from a summer camp for 320,000 pops, which equated to 19 pallets. Stephanie described how Issa was incredulous at the fact that she quickly agreed to deliver the order. “Not meeting our goals isn’t an option,” she says. We could see why they make such a great team. They borrowed space in a freezer from a nearby mushroom farm, and made it happen!

In addition to retail, Mompops also offers catering: They’ll even do custom pops for special events. For instance, a fan-favorite is their “Boozy Pops” which come in flavors such as Mango Bourbon. (These aren’t available for retail, sorry!) Stephanie shares that they have a lot of fun at catering events. 2 years ago, they were hired by Bud Light to work the Firefly Festival, handing out lime pops near the Bud Lime tent. Their pops are also distributed to bars and restaurants in Atlantic City, for use in “poptails”. When asked about the challenges of working in a small business, Stephanie says “I used to run a multi-million dollar business, but I’ve never worked this hard!” From problems with machinery (they’ve had to send a whole machine down to Miami for service) to the challenges of distribution (currently, Issa delivers all local orders himself) their work is seemingly never done. Stephanie says that a small business has “insane highs and insane lows”. Ultimately, all she hopes for is progress every day.

Mompops has recently teamed up with the Juvenile Diabetes Research Foundation (JDRF). This is a cause that is close to home for Stephanie: At the time she started working with Sandra and Issa, her 3 year old nephew was diagnosed with Type 1 Diabetes. Her brother and sister-in-law were told that snacks should be 5 carbs or less, which was proving to be difficult for the family. As it turned out, when Stephanie offered her nephew a Mompop, he had no bad reaction to it! Now, the pops are in constant rotation in their household, as a healthy snack that is low in sugar.

Looking ahead, Mompops wants to get more involved with philanthropy through their work with the JDRF, and to continue to “put out a good, safe product for people”.

On the week we visited, in late May 2018, we were told that the team was preparing for their largest week of orders yet. The day prior to our arrival, the pair had worked from 7:30am to midnight, which Stephanie explained was not out of the ordinary. “We’re seeing so much we’ve been working on come to fruition”, says Stephanie. This summer they plan to hire a full-time helper.

We asked Stephanie what keeps her going when the days get long and tiring. She smiled and said, “we know we’re onto something.” We think so too! Find Mompops to snack on all summer long at your local Kimberton Whole Foods.